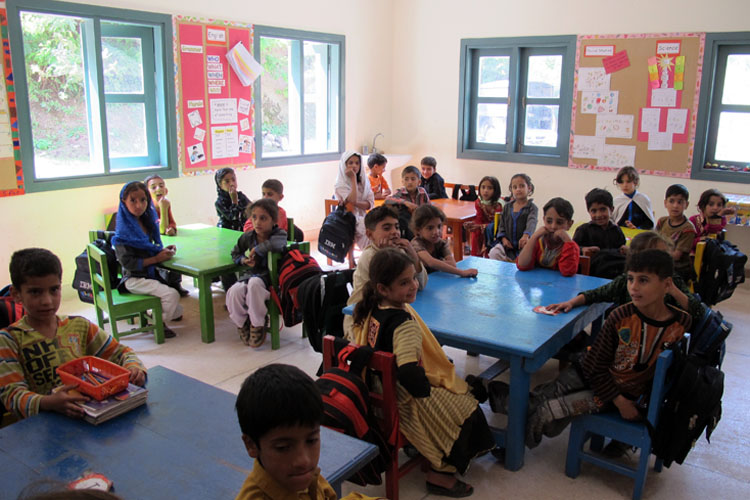 Pakistan ranks 146th among 187 countries in terms of human development (Human Development Report, 2014) and is faced many difficulties in meeting the Millennium Development Goals. Over 36 percent of the population lives below the poverty line and 97 out of 1000 infants do not survive (WFP, 2014).

Educational attainment is very low in Pakistan, even in comparison to other developing countries in the region. The literacy rate in Pakistan was 58% (according to the Pakistan Social and Living Measurements Survey 2014), while in rural Khyber Pakhtunkhwa (KP) this figures dropped to 49%, and then for girls living in rural KP to 32%. Only 51% of children in rural KP has ever attended school according to the PSLM 2014).

Communities in District Mansehra have for generations been some of the most underdeveloped in Pakistan. Of all the districts in the Khyber Pakhtunkhwa province, Mansehra was the most adversely affected by the Earthquake of October, 2005. It caused great losses in terms of human lives, damage to infrastructure and livelihood opportunities. According to estimates given by the district government, a total of 15,997 persons lost their lives while 9,903 were injured as a result of the Earthquake. Moreover, 108,283 houses were completely destroyed and 34,001 partially damaged (District Profile – Mansehra, ERRA 2007). In sum, the overwhelming damage left an already underdeveloped region in an even more misfortunate state.

Regarding school and health facilities, a total number of 1,559 schools in District Mansehra alone were either destroyed or severely damaged, 1,202 of which were located in rural areas, as were 80% of the primary healthcare infrastructure. The reconstruction process of both schools and health facilities have not been sufficient, with only a fraction of those destroyed being constructed. Communities frequently report that educational opportunities and access to health facilities are not widely available in the district.

Where education is available it is subject to unmanageably high student-teacher ratios, insufficient resources, undertrained teachers and mixed level classes. With the outcome of the schooling not producing any tangible benefits for either the family or the child, parents see little hope in sending their children to school, particularly when they could be earning money and contributing to the meagre family income. This is particularly notable for girls with even less facilities available for senior girls. The result is a very low level of school attendance even where schools are available. In addition, the limited facilities that do exist within the valley are primarily offering basic schooling only, which provides scarce opportunity for a child to escape the poverty that affects their family. The Kaghan Memorial School is filling the institutional gap in the education sector of the Kaghan Valley.

Feel free to contact us regarding any information you may need.